A Tale of Two Root Cellars 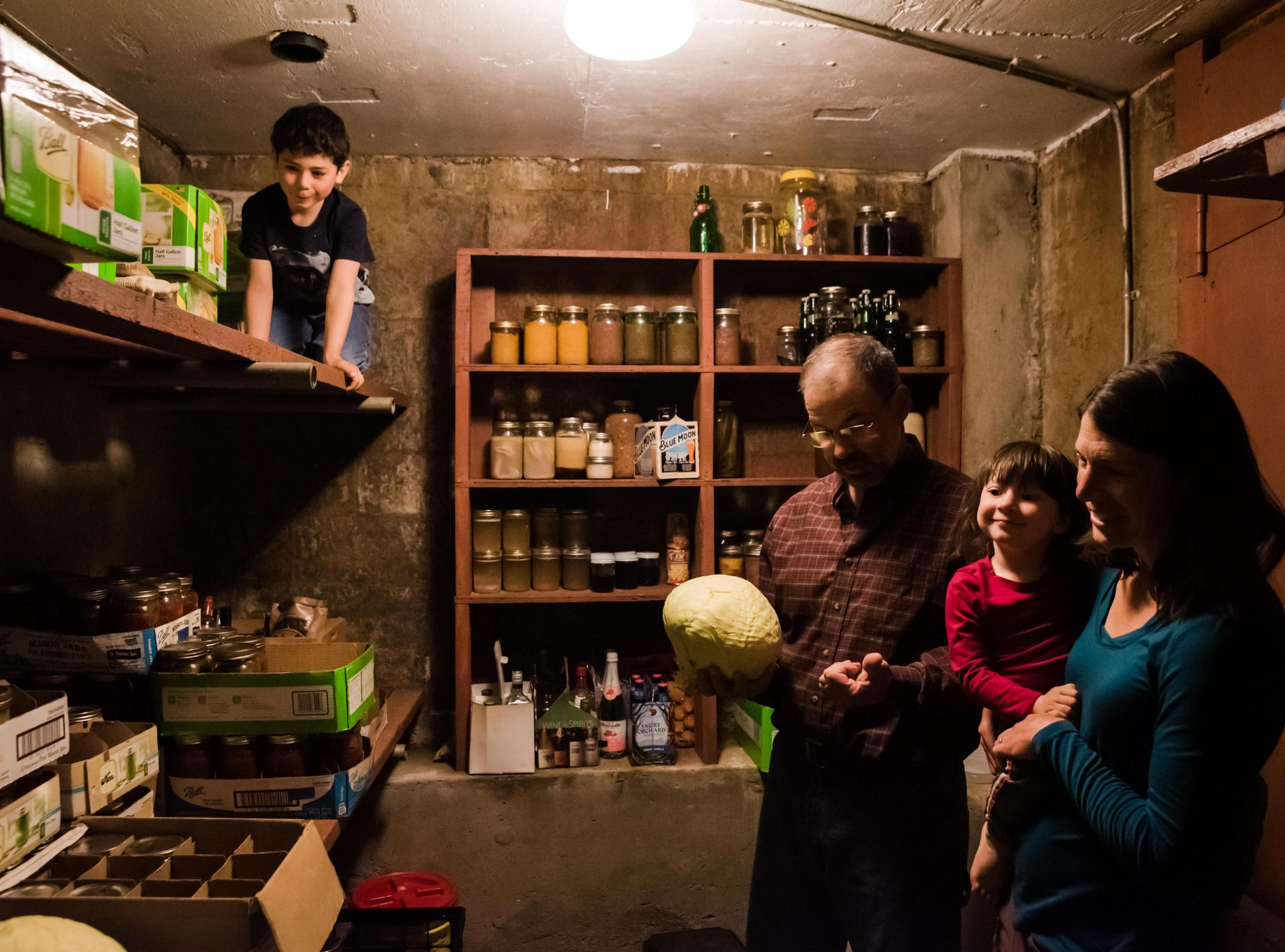 To be completely honest, when a friend brought it up recently, the term “root cellar” evoked thoughts not of modern food storage, but of bygone eras (…for some reason, the Little House on the Prairie books featured strongly in my mind). Root cellars seem quaint. A relic technology left behind. Not exactly the modern garden’s go-to preservation solution.

It turns out, however, that root cellars are in fact the heart of many Alaska homes—an extension of the kitchen stocked with a carefully planned progression of fresh produce, organized in order of longevity and demand.

Alaska conditions (including permafrost and extreme temps in parts of the state), do not in fact preclude root cellars as a low-tech tool for the storage of fresh foods into the winter months. Root cellars play an integral part in Alaska food security as an effective and easily manageable way to preserve the products of our state’s short and intense growing season. In one example, the University of Alaska Fairbanks Institute of Agriculture, Natural Resources and Extension reports that Meyers Farm in Bethel utilizes a root cellar that stores 200,000 pounds of produce. That makes the local and regional sale of root vegetables like carrots, potatoes, onions, and cabbages long after harvest possible, rather than solely relying on outside groceries that are delivered from long distances and which depend on passable weather conditions and other variables to arrive.

Home root cellars in Alaska are as unique and varied as Alaskans themselves. Root cellars are usually, though not always, constructed underground, at a soil depth that will maintain a mostly stable temperature year-round. In many areas of Alaska, though, the depth of seasonal frost reach often requires additional insulation and/or a heat source (sometimes a 100-watt lightbulb is enough) to keep the cellar temperature from dipping below freezing in the winter. Root cellars need to be kept between 32° and 40° F, with 34° F often regarded as the ideal temperature, and they need a high humidity level to preserve most thin-skinned root vegetables. Beyond those basics, however, there are as many ways of doing things as there are root cellars themselves.

In a hilly part of the Goldstream Valley in Fairbanks, Tom and Kalin Seaton’s root cellar is accessible through a regular-sized door opposite their basement well house. (A full-sized door is the somewhat less common choice over trapdoors, which tend to be more energy efficient.) Their cellar was constructed as an extension of the house’s concrete foundation; the cellar continues underground, past the house’s perimeter into the insulating hill. Their cellar is an all-concrete room with “9/28/75” imprinted next to the original owners’ handprints in the entryway step. Vents that snake up to the ground’s surface are the main tools used to regulate the airflow, temperature, and humidity in the root cellar.

Kalin said it actually took them a few years to use their cellar after they initially purchased the property. Neither Tom nor Kalin had ever lived in a home with a root cellar before, but their interest in using it expanded hand in hand with the growth of their ever-evolving homestead. These days, their spread includes a large garden, raised planters, a solarium full of tomato plants, flocks of chickens and turkeys, a small apple orchard, and two children. Though it’s taken three years of experimentation and fine-tuning, each year has brought more success than the last. Last year, they found that the leafier napa and savoy cabbages lasted well until December, as did their carrots and apples (though they noted that the latter two may well have lasted longer, had they not all been consumed by that point). Their red cabbages lasted a few months longer. Some other varieties of cabbage—those grown specifically for their long storage life—still looked fantastic in May. Damp sawdust, a commonly used insulating material for root vegetables, didn’t work out well for the Seatons’ already moist cellar, and they instead found that perforated plastic bags worked best to preserve their carrots.

Their cellar also provides storage space for shelf after shelf of homemade canned goods in Mason jars, even including whole chicken feet from last year’s homegrown meat birds, suspended in broth and pressure canned to be used for soup all through the winter. This year, they planted celery, turnips, and beets in the garden with the intention to continue to add variety to the cellar’s stores. They will also embrace a whole new use of their cellar: overwintering the roots of treasured perennials, like artichoke and kale, that would not survive the Fairbanks winter in the ground. They will also overwinter select biennial plants as part of the two-year maturation process that will allow them to collect and save their own seeds.

The Miller family also lives in the Goldstream Valley, but their homestead is located in a particularly “cold spot” in the lower part. “Homesteading is our hobby, and our passion,” Trish says. She estimates that before they had children, up to 90 percent of the couple’s food supply was self-produced; today, with two children and two full-time jobs between them, their homestead still produces an impressive proportion of the family’s food. They bought their home with plans in mind to add a root cellar as they developed their gardens and livestock. Concerned about how permafrost could affect the foundation of an under-the-house construction, the Millers originally planned to build their root cellar unattached from their home, somewhere in the woods that surround the house. First, though, they consulted a local builder with extensive experience in both farming and construction, and he advised against that plan. “He said if the cellar was away from the house, in the woods, it would be so hard to access through the snow in the winter that we’d end up never using it, and I think he was right,” Trish says. Instead, they took his advice to build the cellar under an arctic entry addition to the house. Due to the very real concern of ground movement, their cellar was built with a uniquely Alaskan adaptation. Screw jacks separate the concrete walls of the root cellar (which end maybe a foot above ground level) and the entryway’s foundation, so that the house can be leveled independently of the cellar.

The Millers’ cellar is accessed through a super-efficient insulated trapdoor and ladder just inside their arctic entry. A drain is built into the poured concrete floor, as is tubing that carries hot water from the house’s boiler to heat the cellar when needed. A ground-level pipe, screened off to keep rodents out, serves as a vent. Trish has found that covering or uncovering the vent is all that is needed to regulate the cellar’s temperature for the majority of the year, though they do occasionally need to use a fan or to turn the heat on for a few hours a day in the winter to keep the temperature at the ideal 34° F. At harvest, they will fill the cellar with Tetris-like stacks of heavy, open-topped wooden crates of vegetables packed in moist sawdust, each lowered down the ladder by rope handles in a two-person production. For them, sawdust has worked fantastically as a packing and insulating material that also maintains the moisture required by root vegetables (like carrots) to avoid shriveling and spoilage. The shelves built into the walls of the cellar hold vegetables that need more ventilation, like cabbage, in addition to jar after jar of home-canned pickles, preserves, fermentations, broth, and more.

The root cellar is a perhaps understated but vital cog to their homestead in ways beyond the simple longevity of produce. For example, during the short and intense growing season of summer, the homestead’s extensive gardens require extra help. A group of family, friends, and neighbors weeds and tends all summer long in exchange for a virtually unlimited share of the harvest. The cellar’s location in the arctic entryway rather than the main house (or in the woods under several feet of snow) allows the farmhands easy access to the stores any time of year. The cellar also plays an important role in the family’s protein: a series of sturdy hooks on the ceiling has made the cellar an ideal place to hang and butcher beef halves, freshly butchered pigs, and, during hunting season, caribou and moose. Likewise, it’s the perfect spot to cure ham and bacon. And eventually, the Millers would like to try their hand at storing homebrewed beer.

In the interior, the Calypso Farm & Ecology Center, The Folk School, and the Cooperative Extension Service all offer occasional workshops, support, and information about root cellars as part of their curricula. A helpful Cooperative Extension publication that covers the basics of vegetable storage in root cellars is available as a free PDF download. 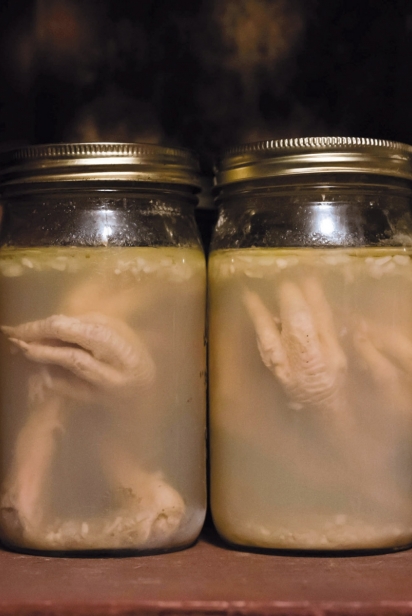 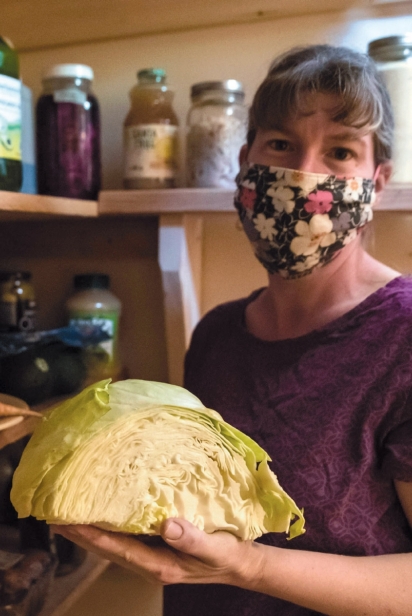 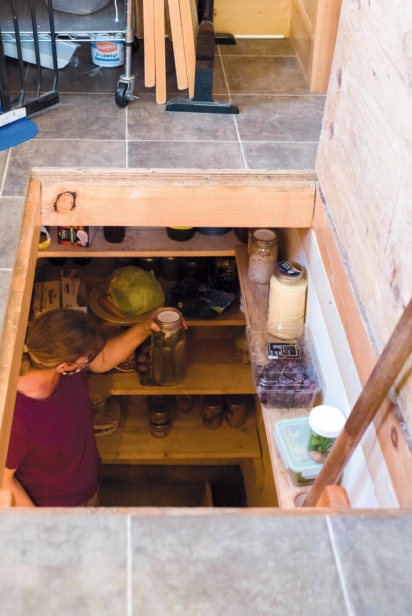 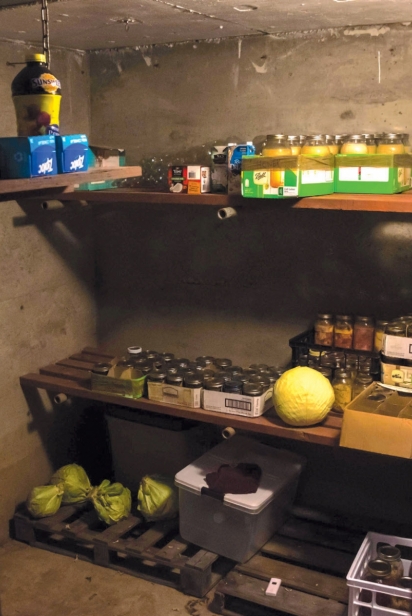 Photo 1: Chicken feet canned in Mason jars shelved in the Seaton’s cellar.
Photo 2: Trish Miller holds the last piece of their last 2019 cabbage, which is still perfectly delicious in late May 2020.
Photo 3: The entry to the Millers’ root cellar is a trapdoor in their home’s arctic entryway; the ladder’s banister lifts up to function as a safety latch so the trapdoor can’t close.
Photo 4: A view of what remains in the Seatons’ cellar in May. 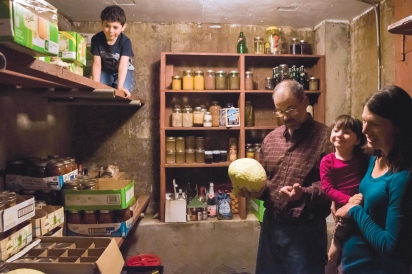 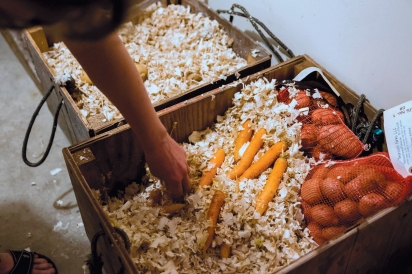 Photo 1: Buck Seaton perches on the cellar’s top shelf, which is pretty roomy by the time May rolls around; Tom Seaton holds one of their remaining cabbages; Kalin holds Ruby.
Photo 2: Trish Miller shows off some of their few remaining carrots and potatoes from their 2019 harvest, packed in stackable crates of moist wood shavings.

Eyes on a Unique History On a sunny Sitka afternoon, a group of Pacific High School students and community members carve four-inch deep lines into the soil. Gingerly, the students cradle seed pot...

Last summer I had the pleasure of attending a recipe writing workshop at Tutka Bay Lodge. Not only did we thoroughly enjoy being pampered by lodge staff, we had the opportunity to up our recipe game w...
Article from Edible Alaska at https://ediblealaska.ediblecommunities.com/food-thought/two-root-cellars

The Best of Edible Alaska. Delivered to Your Inbox.

Get recipes, food stories, and the inside scoop on events each month.